Brazilian pepper tree is native to Argentina, Paraguay, and Brazil. Brazilian pepper tree was brought into Florida in mid-1800 for use as an ornamental plant. Related to poison ivy, poison oak, poison sumac, the Brazilian pepper has the potential to cause dermatitis to those with sensitive skin. Some people have also expressed respiratory problems associated with the bloom period of pepper tree. It is an aggressive invader of disturbed habitats; many plant communities such as hammocks, pinelands and mangrove forests are often invaded and dominated by Brazilian pepper tree. The brazilian pepper tree is a shrub or small tree that reaches over 30 feet in height, typically with a short trunk hidden in a thicket of branches. It is the most widespread of Florida’s nonnative invasive plant species occupying more than 700,000 acres.  Although primarily an invader of landscapes in which the soil has been disturbed and fire excluded, it has formed large dense forests in relatively undisturbed areas adjacent to mangroves along the southwestern portion of Everglades National Park and within the coastal areas of West Central and South Florida.

The leaves are alternately arranged with 1-2 inch long, elliptic, and finely toothed leaflets. The leaves are also reddish, often possessing a reddish mid-rib. The flower clusters are white and 2-3 inches long with male and female flowers that look very similar. The glossy fruits are borne in clusters that are initially green, becoming bright red when ripe. Seeds are dark brown and 0.3 mm in diameter. Flowering occurs from September through November and fruits are usually mature by December. Local dispersal of this invasive plant is primarily by raccoons and opossums; long-distance spread is facilitated by fruit-eating birds, such as migratory American robins. 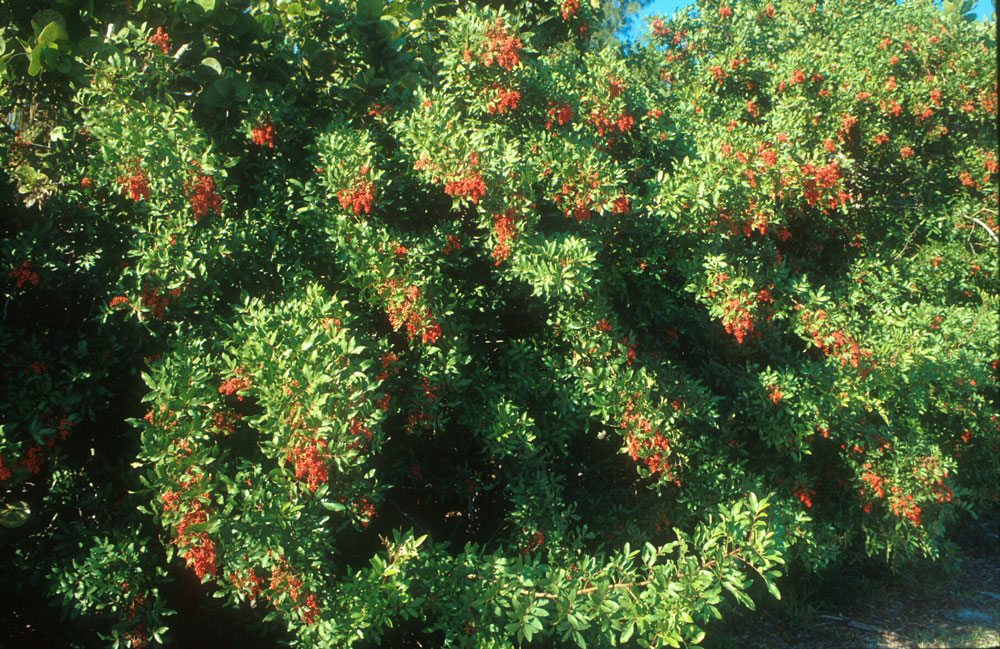 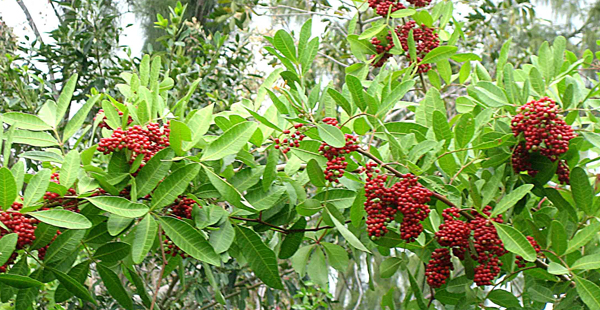 Why is the Brazilian Pepper tree such a problem?

This shrub/tree is one of the most aggressive and wide-spread of the invasive non-indigenous exotic pest plants in the State of Florida. There are over 700,000 acres in Florida infested with Brazilian pepper tree. Brazilian pepper tree produces a dense canopy that shades out all other plants and provides a very poor habitat for native species. This species invades aquatic as well as terrestrial habitats, greatly harming the quality of native plants and animals in the state.

Because of its aggressive growth rate, never plant Brazilian pepper.  Possession of Brazilian pepper with the intent to sell or plant is illegal in Florida without a special permit. Care should also be exercised to avoid seed spread through disposal of cut trees.