The Burmese python is one of the largest snakes in the world reaching up to 23 feet in length and almost 200 pounds.  Adult Burmese pythons caught in Florida average between 6 ft and 9 ft; the largest python captured in Florida measured over 17 ft in length. Typical Burmese pythons are tan in color with dark blotches along the back and sides.  The blotches look like puzzle pieces, and also resemble the markings on a giraffe.  They have a pyramid-shaped head with a dark, arrowhead-shaped wedge extending toward the nose. Burmese pythons are semi-aquatic and are often found near or in water.  They are also excellent climbers and can be seen in trees. Pythons’ rapid and widespread invasion is facilitated by aspects of their natural history such as diverse habitat use, broad dietary preferences, long lifespan (15-25 years), high reproductive output, and ability to move long distances. Burmese python hatchlings are larger than hatchlings of native species and are less susceptible to predators. These multiple advantages may allow pythons to compete with native snakes and other predators for food, habitat, and space.

Of particular concern is the spread of pythons to biologically vulnerable areas such as the Florida Keys. Because Burmese pythons are excellent swimmers and can travel long distances in water, the many creeks and canals separating the Keys should not inhibit python movement. In fact, pythons have already been found on Key Largo, where dietary analysis established that the endangered Key Largo woodrat is among their prey. Burmese pythons are known to frequent wading bird colonies in their native range and, in South Florida, two wading bird species of special concern (limpkin and white ibis) are known python prey. Other threatened and endangered bird species may be at risk. Moreover, the overlap in diet suggests that the state and federally threatened indigo snake may have a fierce competitor for prey. 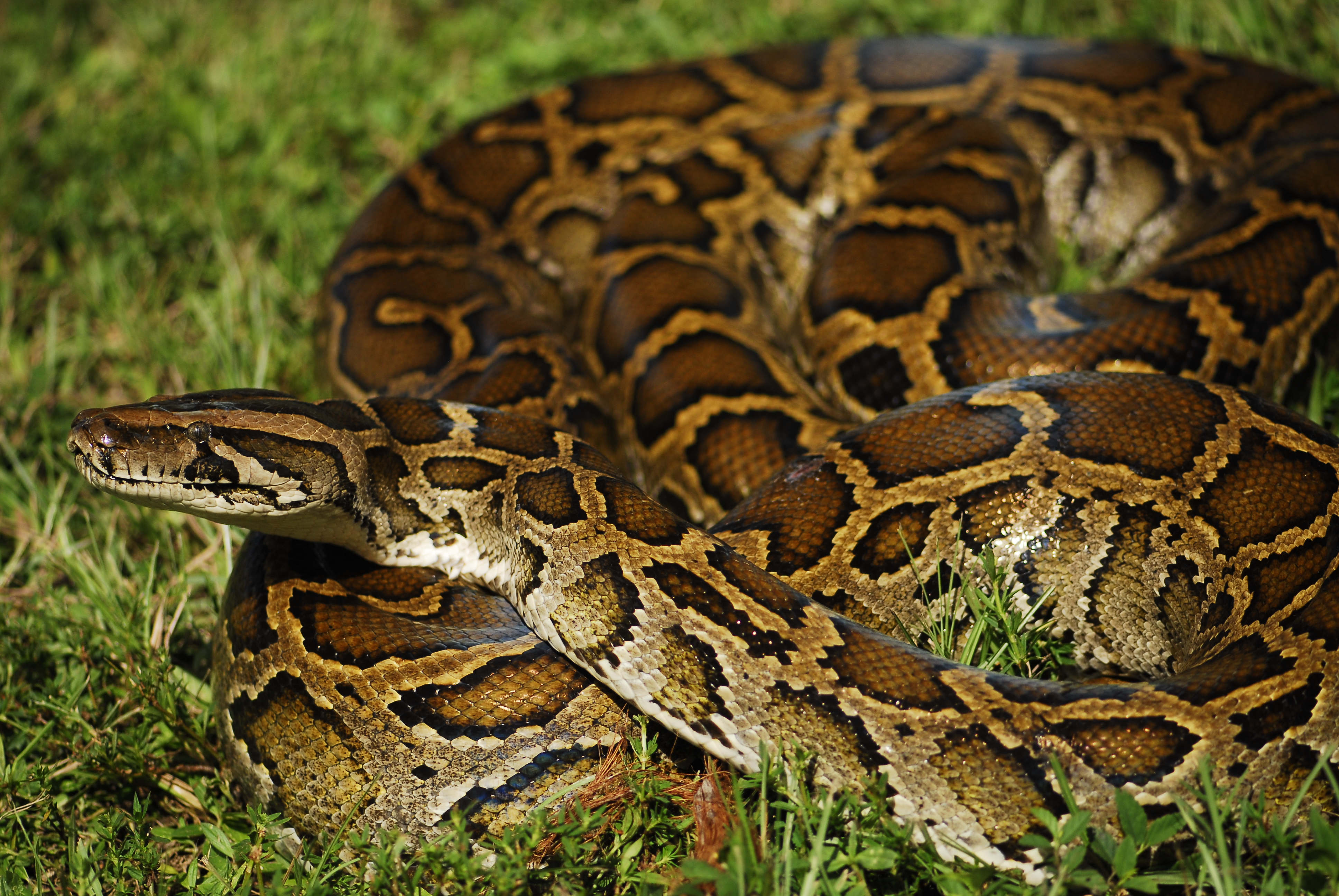 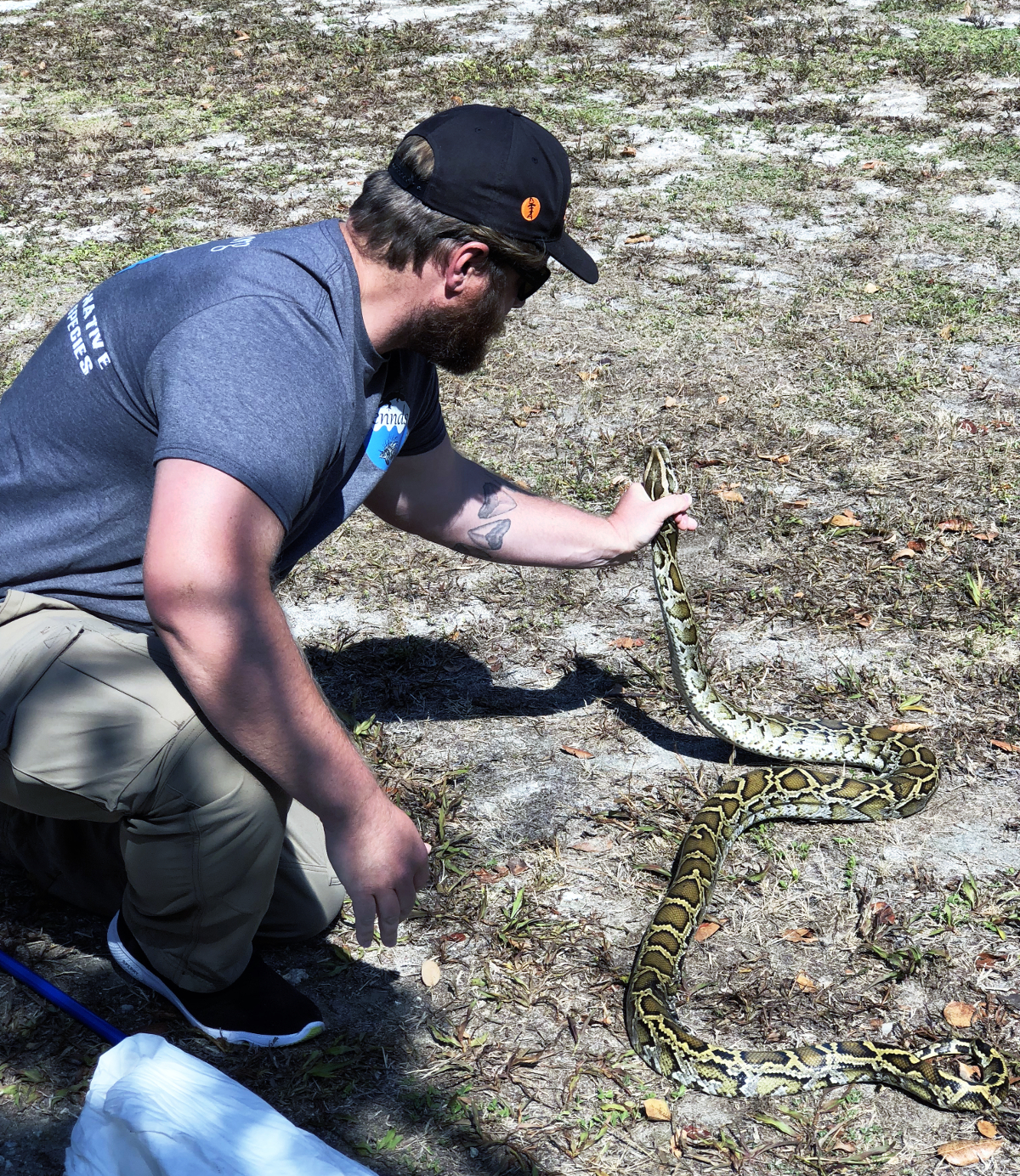 Burmese pythons have been reported from the saline glades and mangroves at the south end of Everglades National Park since the 1980s. On May 17, 2006, the first python nest was discovered in South Florida, confirming that pythons are breeding in the wild. Pythons of both sexes are believed to reach sexual maturity at a length of around 8.5 feet. Mating in Everglades National Park occurs between December and April. Males locate females by detecting pheromones (chemicals secreted by one animal to send a message to others of the same species). Breeding aggregations of one female and several males are commonly formed. Females lay eggs in May and June, and remain coiled around the clutch until hatching occurs in July and August. In a sample of eight clutches discovered in South Florida (one nest and seven pregnant females), the average clutch size was 36 eggs, but pythons have been known to lay as many as 107 eggs. A recently captured adult female in the Everglades was found to be carrying 85 developing eggs.

Initial results based on radiotelemetry demonstrate that female pythons make few long distance movements throughout the year, while males roam widely in search of females during the breeding season (December-April). In the Everglades, telemetered snakes moved into habitats away from the road edges where they had been captured and into areas with higher elevation (i.e., tree islands and rock outcrops). A number of relocated pythons have demonstrated a “homing” ability: after being released far from where they were captured, they returned long distances (up to 48 miles) in only a few months. Some python individuals moved rapidly (up to 4 miles in 3 days) when surface water was present.These findings suggest that pythons searching for a suitable home range have the potential to colonize almost any area in South Florida.

What is Ennds.org doing to address the invasive Burmese Python problem? 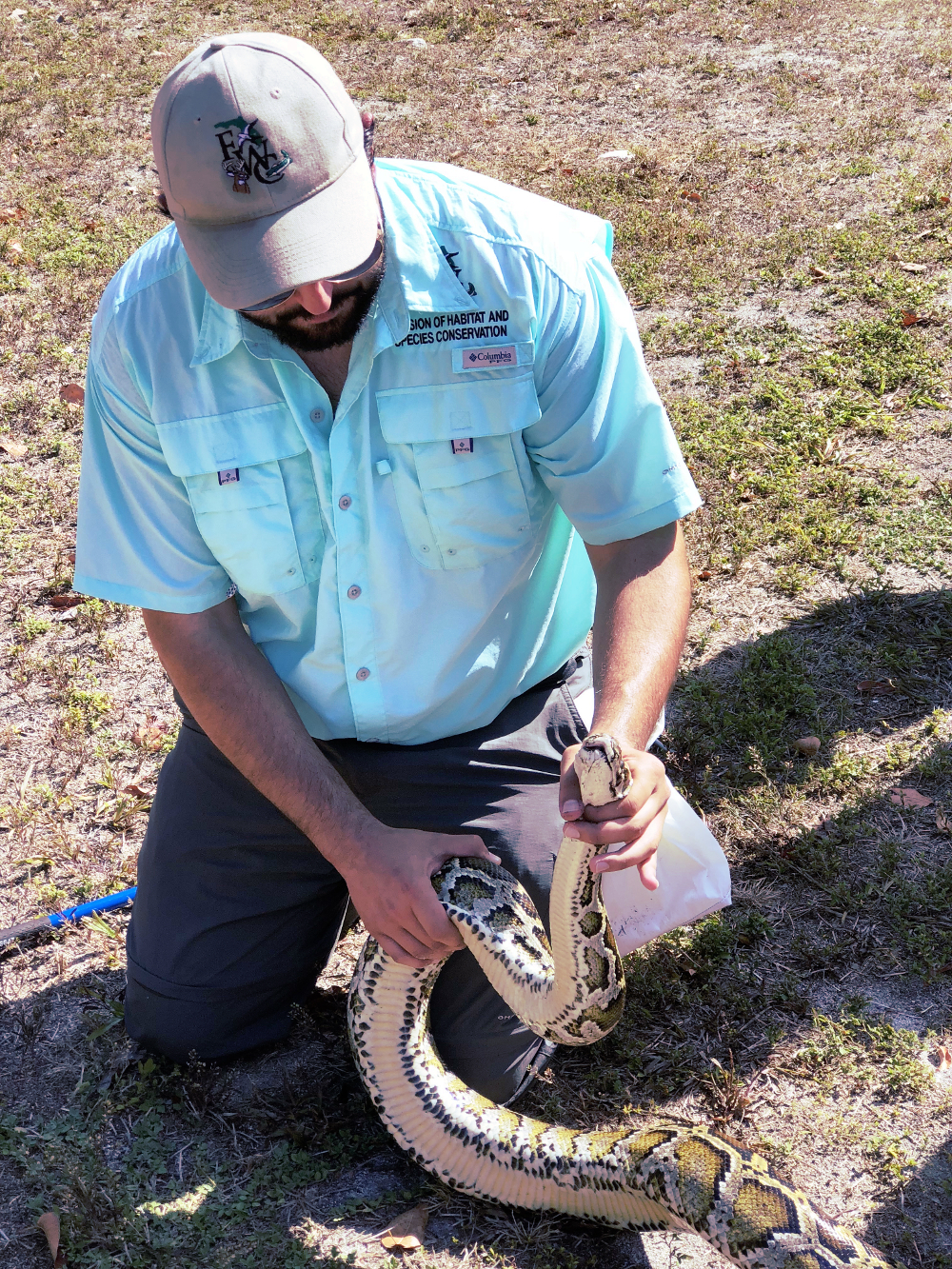 Several Ennds members recently participated in python live capture training with the FWC in the Florida Keys. We are looking to assist with the planning of other python capture classes and build a team of python hunters to participate in organized Ennds hunts for this destructive invasive species. As always we welcome your support for our non profit and are always looking for feedback. If you would like to learn more about how we are dealing with the invasive Burmese Python, take a class on capturing them, or participate in a hunt please check back on our website regularly or follow us on our facebook page for the latest information.

Did you see an invasive Burmese Python? Take a picture, note the location and report it to FWC through their Exotic Species Reporting Hotline: 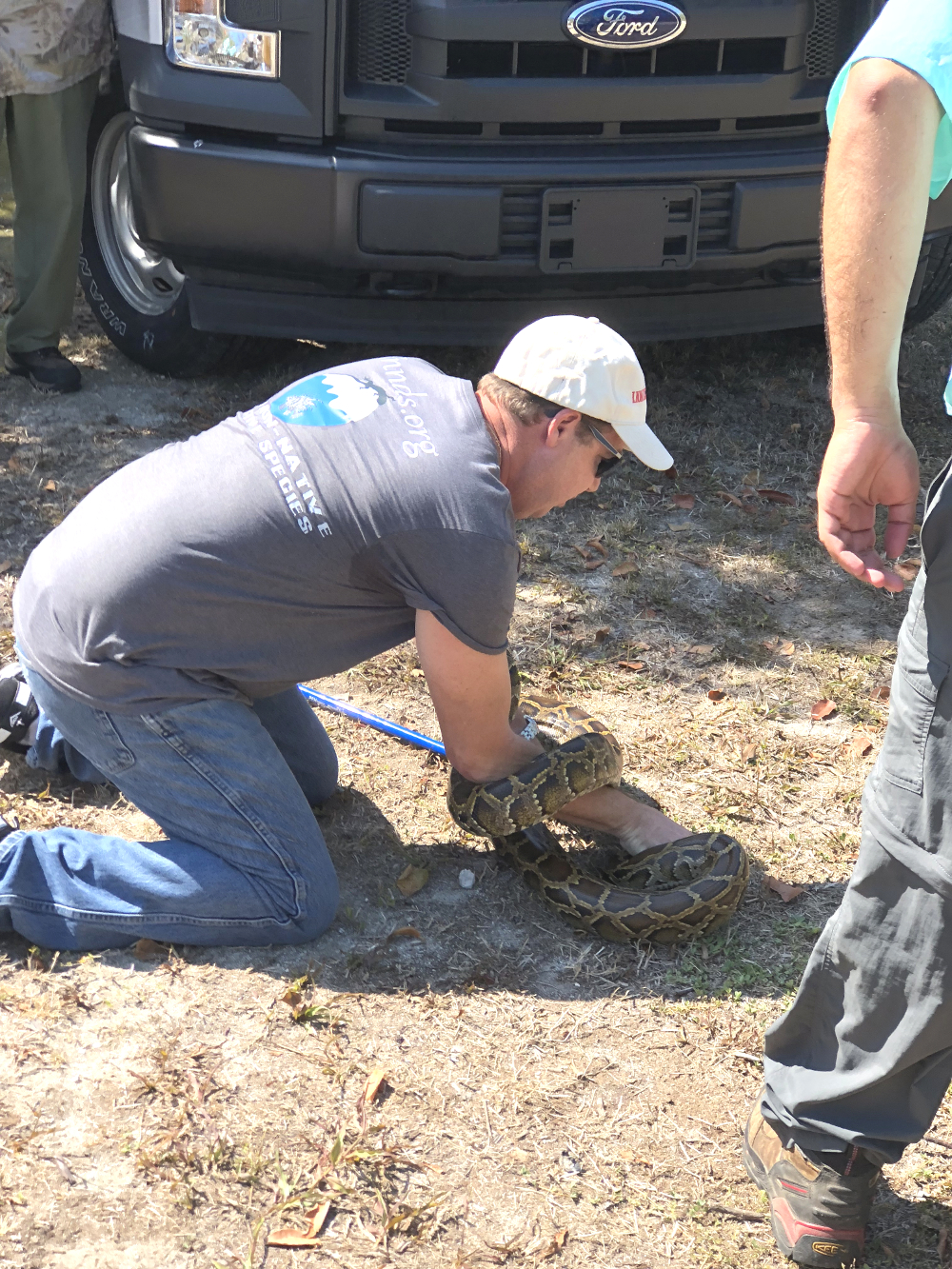