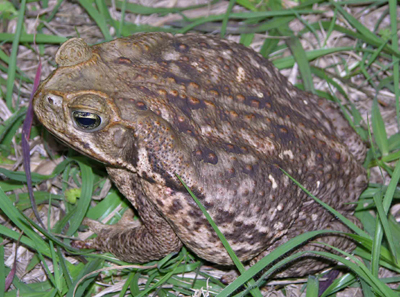 Rhinella Marinus (formerly Bufo Marinus) is the scientific name for the invasive toad found throughout much of the southern half of Florida. This problematic invader is a huge brown to grayish-brown toad with a creamy yellow belly and deeply-pitted parotoid glands extending down the back. Adult giant toads generally range in size from 6 to 9in (15 to 23cm), but may get larger. They are replacing the native southern toad (Bufo terrestris) in the cities of southern Florida. It was originally released in the U.S. in sugar cane fields to help control “white grubs,” larvae of pest Scarabaeidae. The toad became established in southern Florida as result of accidental release of about 100 specimens from the stock of a pet dealer at Miami airport in 1955, and by subsequent releases by pet dealers in the 1960s.

Cane toads are omnivores that will eat insects, vegetation, small birds, other toads or frogs, lizards, small mammals, and snakes. If available, cane toads have been known to be attracted to and eat human table scraps and are attracted to pet food. Bufo’s are attracted to dogs’ watering dishes, and may sit in the rim long enough to leave enough toxin to make a dog ill. It’s generally recommended to not leave dog food outside, especially at night, for this reason.

Why is the Giant (Cane, Bufo, Marine) Toad such a problem?

When this non-native species is threatened or handled, it secretes a highly toxic milky substance from its large parotoid glands at the back of its head, behind the ears. This secretion can burn your eyes, may irritate your skin, and can kill cats and dogs if they ingest the secretion. Symptoms of this Toad poisoning in pets include drooling, head-shaking, crying, loss of coordination, and, in more serious cases, convulsions. The dog’s (or cat’s) gums often turn red, an indicator used by veterinarians to distinguish toad poisoning from epilepsy. For this reason, pet owners should be familiar with their pet’s normal gum color.

Treatment: If you suspect toad poisoning, get a hose and run water in the side of the dog’s/cat’s mouth, pointing the animal’s head downward so water isn’t swallowed. Rub the gums and mouth to remove the toxin. This treatment is usually successful, but call your veterinarian immediately.

These toads are seen mostly during the rainy season (late May to mid October) and most often at night, near lighted areas, as they are attracted by the bugs. They are seen much less frequently during daylight hours, but can be found hiding under vegetation. One of the ways to reduce toads in your yard is to eliminate potential food sources like pet food.

What is Ennds doing to help control the invasive toads?

All of us at Ennds are pet and animal lovers, so we take the invasive giant, bufo, marine, cane toad very seriously because of the risk to our beloved dogs and cats. The toads are also a significant threat to the native Southern Toad, so it’s important when removing them to identify them properly as the picture to the left shows. We have been working to eliminate the toads in our neighborhoods whenever encountered and are working to educate the public on the dangers of the toad to pets, how to identify them properly, and the need to eradicate when possible.