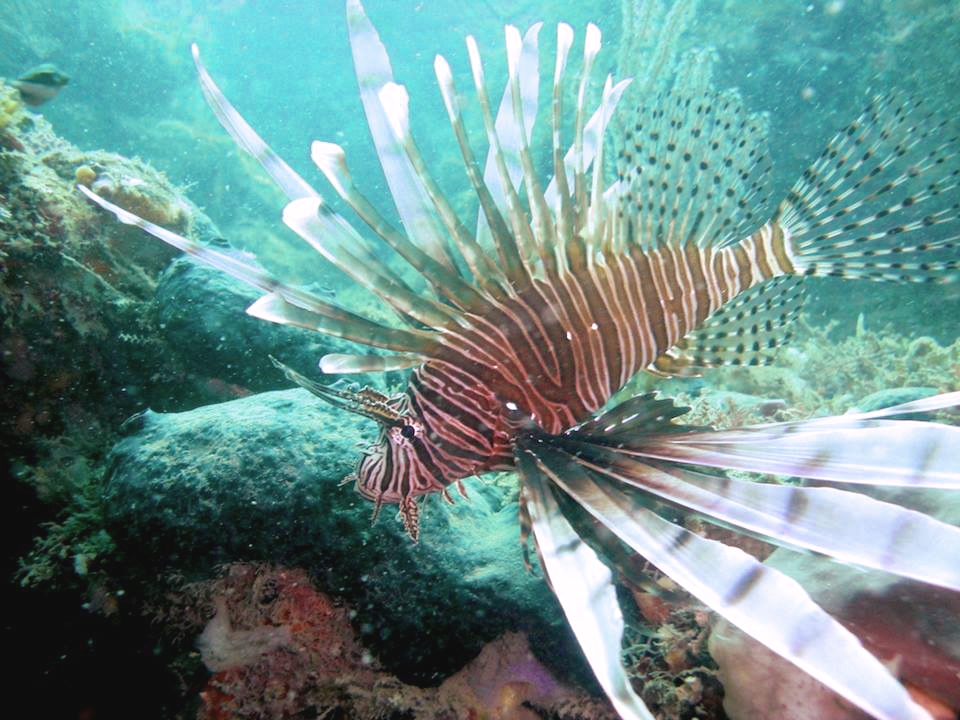 Why are lionfish a problem?

Non-native lionfish are a terrible problem in the Western Atlantic Ocean, Caribbean Sea and in the Gulf of Mexico, however they are not a problem in their native ranges of the Indian Ocean, Southern and Western Pacific Ocean and in the Red Sea. It is an established fact that the most likely cause for the invasion in the Western Atlantic Basin is aquarium owners who released their beloved pets into the ocean, while lionfish migrating through the Suez Canal is the most likely cause for their establishment in the Mediterranean Sea. Lionfish were first spotted off the coast of Florida in the 1980’s, disproving the common myth that they were released during Hurricane Andrew in 1992.

This effective predator can eat prey over half the size of their own body as long as it will fit into their mouths. Their stomach can expand up to 30 times the normal volume and one will fill up to capacity as soon as it is able. They are not picky eaters and feed indiscriminately. Scientists have cataloged over 70 different species that lionfish will eat through stomach content analysis. In addition to the fish they eat, they also eat invertebrates and mollusks – shrimp, crabs, juvenile octopus, squid, juvenile lobster, sea horses, etc.

Why do we hunt lionfish?

We now know that we will never eradicate the population from the invaded areas. They are here to stay and we must all get involved to manage their population until nature finds a way to reach some balance. So far, divers are proving to be the most valuable tool in controlling the lionfish population in the shallow coastal areas that are accessible. Because they generally only eat small live fish, lionfish are only very rarely caught on hook and line, usually with a live shrimp. The native species that invasive lionfish are feeding upon do not recognize them as a predator and flee. In fact, just the opposite has been shown to be true. Small fish will often congregate around a lionfish, most likely believing that the it’s long spines, fin rays and feathery pectoral fins offer them shelter and protection from predators. However, when the lionfish is ready to eat, these fish are herded into alcoves where they cannot escape. These amazing predators use lighting fasts strikes and gulp down dozens of whole fish at a time. Science has demonstrated that a single lionfish can reduce native marine creatures by 80% to 90% in its range within just 5 weeks. 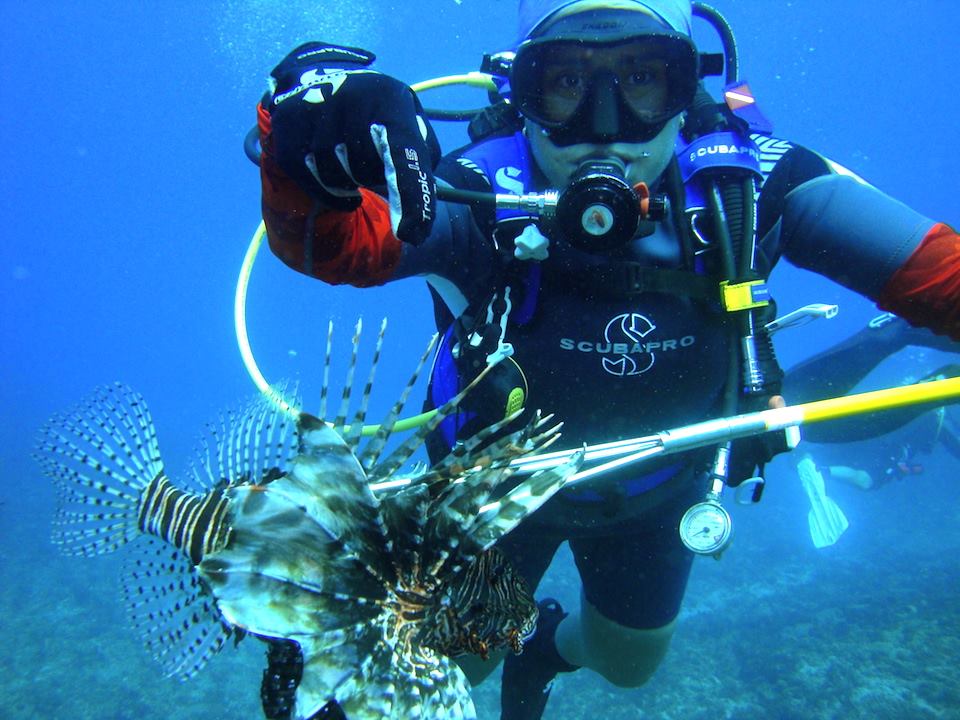 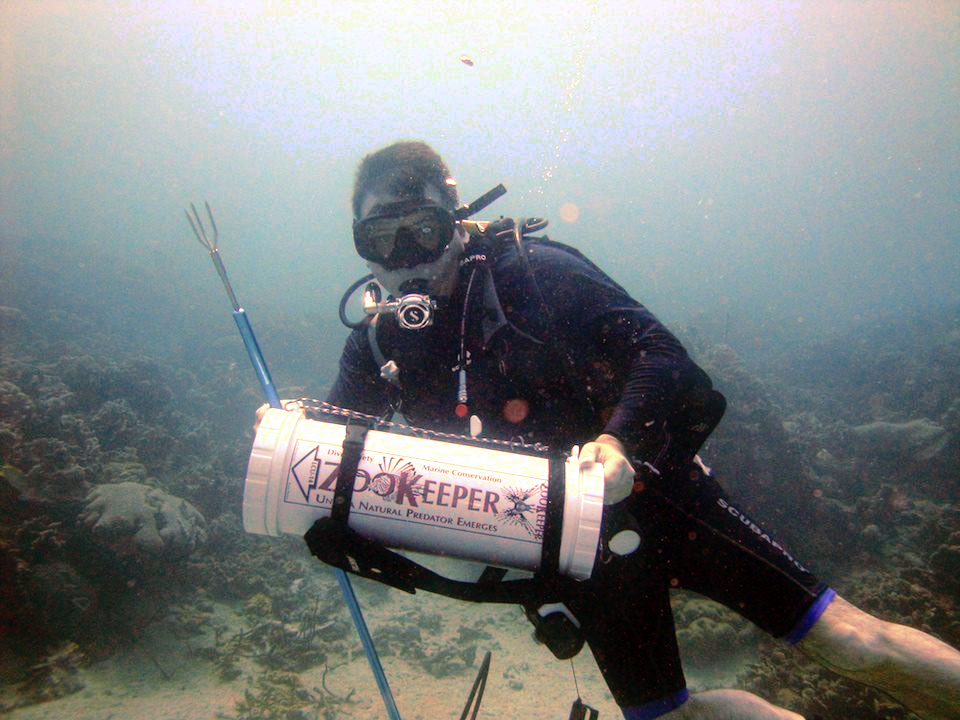 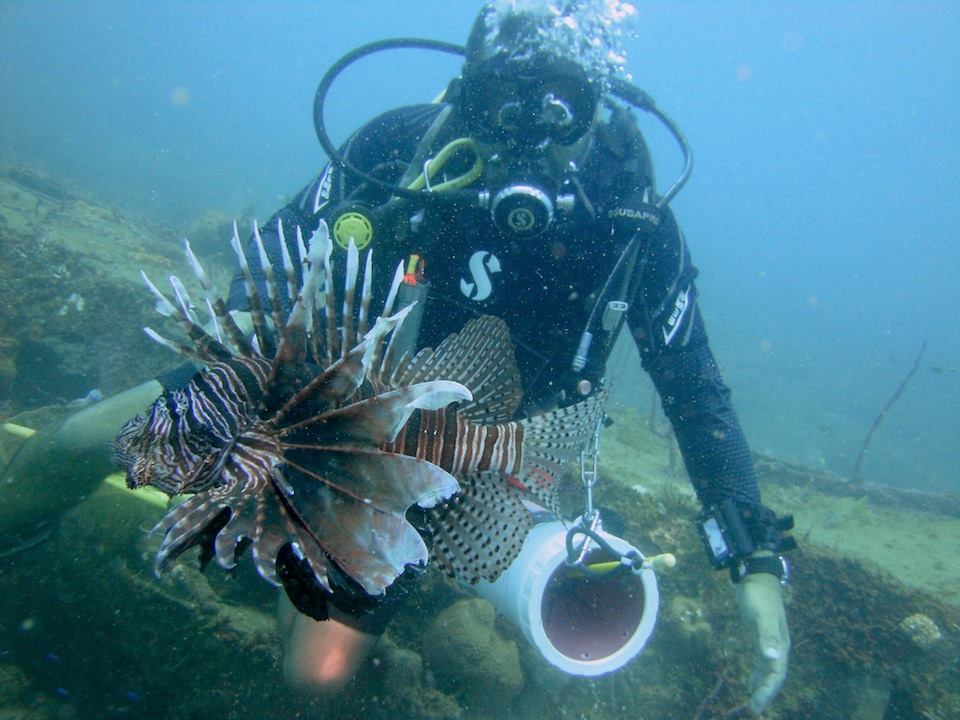 Lionfish are a part of the Scorpaenidae family. Commonly called scorpionfishes the family includes approximately 500 different species. Adult-sized invasive P. volitans and P. miles average between 12 – 16 inches (31 – 40 cm) in length. The red lionfish and devil firefish is almost always striped in white, dark red, brown and black with dark spots found in orange fin rays and caudal fin (tail). It is not uncommon to find these fish turning almost entirely black. Common names are lionfish, zebrafish, firefish, turkeyfish, red lionfish, butterfly cod, ornate butterfly cod, peacock lionfish, red firefish, scorpion volitans, and devil firefish. The genus name “Pterois” is from the Ancient Greek word for “feathered” or “winged.” There are 10 species in the genus.The species name “volitans” is Latin for “flying” or “hovering” and “miles” is Latin for “soldiering.”

Female lionfish are sexually mature and will release eggs when they reach 7 to 8 inches in length, or approximately one year old. A female lionfish can release between 10,000 and 30,000 unfertilized eggs every 4 days year around, approximately 2 MILLION eggs per year, in South Florida and warmer Caribbean waters but possibly only spawn 3 to 4 months a year in colder waters. She will typically release 2 egg sacs that are between 1 and 2 inches long every spawn. It has been reported that the egg sac contains a chemical deterrent that discourages other fish from eating the eggs. The eggs sacs and larvae are distributed by ocean currents. Once its territory is established, a lionfish will not usually travel very far from its home. Their stomach can expand up to 30 times it’s normal volume. They primarily hunt during the twilight hours of dawn and dusk. They have also been described as active hunters during periods of dim ambient light such as on overcast or notably cloudy days. Lionfish can eat prey just over 1/2 its own body size as long as it can get its mouth around the prey and they are known to eat just about every marine creature in its range, by some estimates that includes over 70 different fish, invertebrates and mollusks.

Amazingly, they can be found in just inches of shallow water or as deep as 1000 feet. They are extremely fresh water tolerant and can be found in rivers far from the coast.

What is Ennds doing to address the lionfish problem?

Click here to see learn about our upcoming lionfish hunt in Jupiter, FL

As part of our mission to end non-native destructive species we are working aggressively to control the invasive lionfish in the Western Atlantic. We conduct regular removal trips and are working to train new divers on the techniques and methods of hunting them. We organize lionfish hunts where we will loan out gear if needed and educate divers on how to safely harvest the spiny fish. Please Contact Us or follow on our Facebook page to learn about our upcoming lionfish hunts!

Why are lionfish a problem?
FWC Lionfish Program 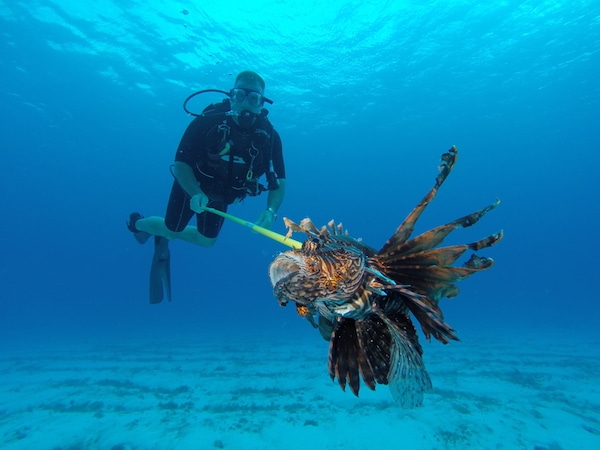