The wild hog (Sus scrofa), also called the wild pig, wild boar or feral pig, is not a Florida native but has grown its population to nearly 500,000. It is believed that hogs were first brought to Florida, and possibly the United States, in 1539, when Hernando de Soto brought swine to provision a settlement he established at Charlotte Harbor in Lee County. However, it is possible that hogs had been brought to the same site in 1521 by Ponce de Leon during a brief visit. During the next four centuries, explorers and settlers brought pigs with them throughout Florida. Wild hogs are now found in every county in Florida and in at least 35 states and Canadian provinces, including most of the Southeast. Florida’s wild hog population is second only to Texas’s. Coloration of feral hogs and Eurasian wild boar can vary. Feral hogs typically have solid-colored, black, white, and/or reddish-brown hair either in solid or mottled patterns across the body.

Likewise, wild hog size and weight are variable, and depend on genetics and local conditions. Normally, male hogs (called boars) are larger than females (called sows). Average adult males can weigh 200+ pounds, stand about 3 feet at the shoulder, have tails reaching 12 inches, and be almost 5 feet from the tip of the tail to the tip of the snout. Amazingly, males greater than twice this size have been recorded. Hogs have 4 continually growing, self-sharpening tusks (2 in the upper and 2 in the lower jaw; upper and lower tusks rub against each other, which keeps them sharp). Tusks in females are relatively small, while in males they become quite pronounced and can have trophy value. Male hogs generally possess a thick hide on their shoulders (up to 3/4 of an inch thick) known as a hog shield that protects them during fights. All wild hogs have an excellent sense of smell and good hearing, but relatively poor vision. Wild hogs use a variety of vocalizations, including an alarm grunt given by the first hog to sense an intruder that causes a flight response by the rest of the herd. 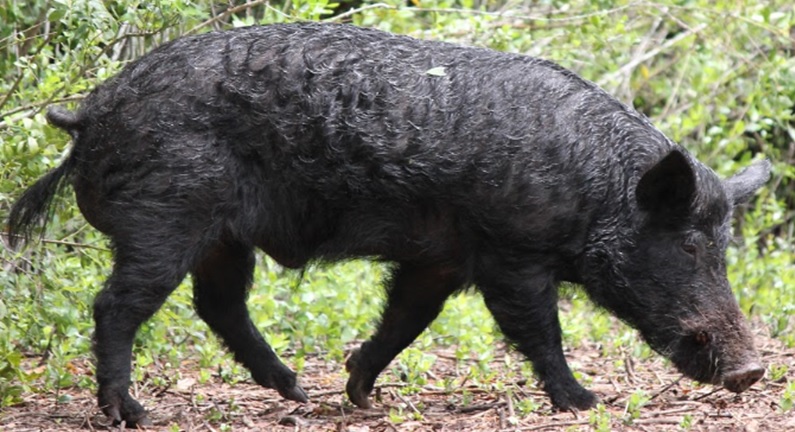 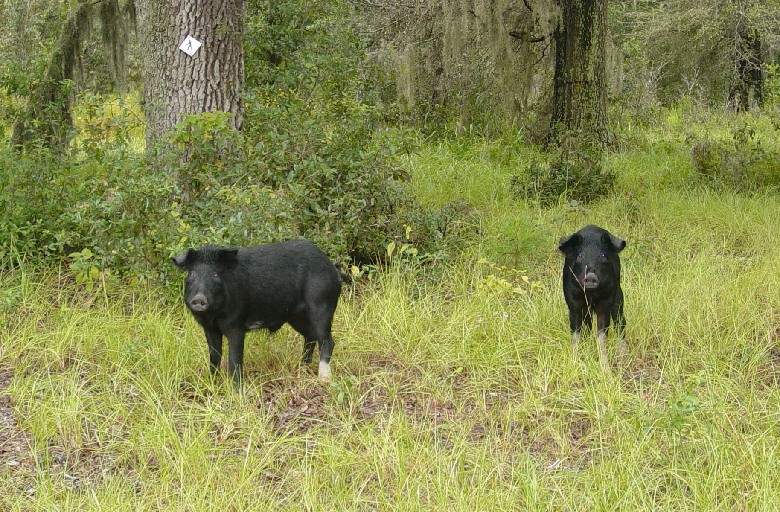 Wild hogs are omnivorous, opportunistic feeders. The list of foods hogs eat is diverse and includes grass, woody plant stems, roots, tubers, leaves, seeds, and fruits, fungi, and a variety of animals including worms, insects, crustaceans, mollusks, fish, small birds, mammals, reptiles, and amphibians. Wild hogs consume far more plant than animal material, and their opportunistic tendencies often lead them to forage in agricultural lands and forest plantations where they can cause significant losses of crops. Reaching sexual maturity at one year, the wild hog breeds year round and can produce 2 litters a year of up to a dozen young.

The wild hog occupies a unique space among the destructive invasive species which Ennds targets. They are essentially treated as wildlife in many ways, although they can be hunted year round in Florida without a license on private land, they are the second most hunted species in the state (behind the white tail deer) and are regulated on public Wildlife Management Area land and must only be hunted during regular seasons.

Why are Wild Hogs a problem and what is Ennds doing to help control them?

In addition to the effects of consuming, knocking down, rubbing, and trampling large amounts of native vegetation and crops, the rooting behavior of hogs also causes significant damage. Rooting (digging for foods below the surface of the ground) destabilizes the soil surface, which can lead to erosion and exotic plant establishment; uproot or weaken native vegetation; and damage lawns, dikes, roads, trails, and recreation areas. Hogs generally live around water because wallowing is extremely important to them. Because they are not well suited to keeping themselves cool naturally, they wallow it wet areas to lower their temperature as well as to remove fleas, ticks, lice and other external parasites. They will wallow in almost any body of water (they are also very good swimmers) and this wallowing can lower the water quality of the area.

Hunting is one of the best methods of controlling the feral hog population and has helped to provide revenue for landowners around the state as there is good commercial value in hog hunting. Ennds has been working with several organizations to establish controlled wild hog hunts throughout the state of Florida. If you would like to learn more about upcoming events and training please click here to follow us on our Facebook page or feel free to Contact Us at any time. 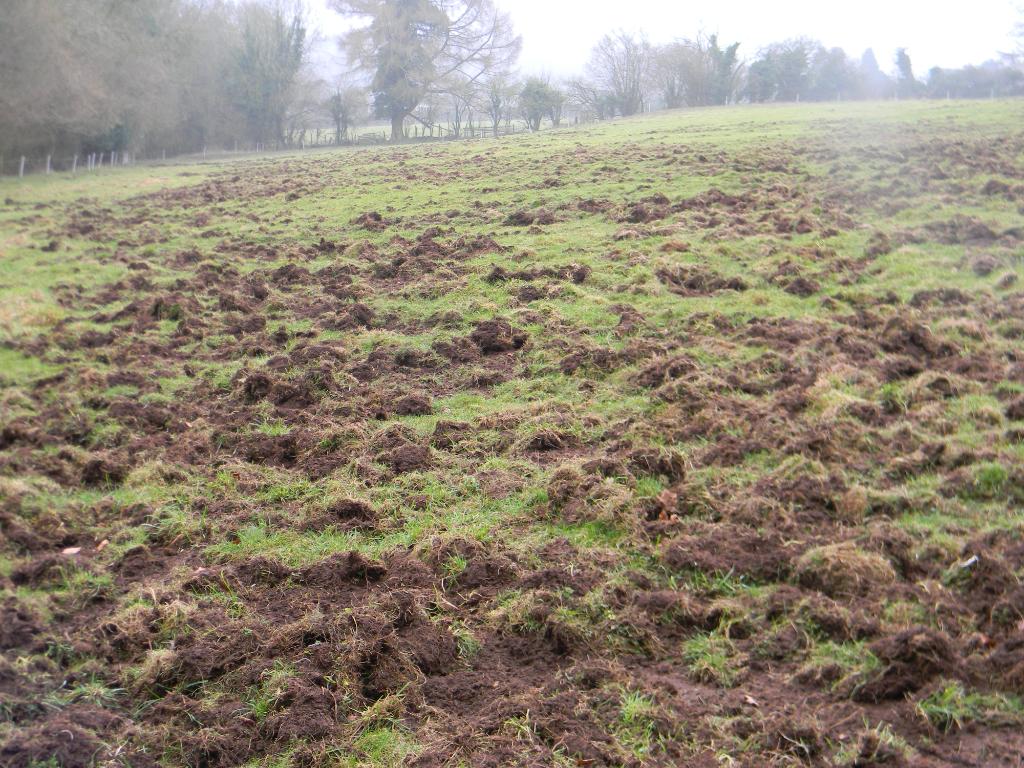 Damage that wild hogs cause by rooting for food